Our Mavs are back home tonight for a Sunday showdown with the LA Clippers at the AAC for a 6 pm CT tip-off.

The Mavs are 8-2 at home this year.  The American Airlines Center (AAC) has become a fortress where the Mavericks play an intensity and passion that their opponents cannot match.  I am at every Mavericks home game and can attest to the energy and electricity in the building. The metroplex may favorite the surging 7-5 Cowboys, but when it comes to the AAC on game night, the fans are crazy about their Mavericks basketball.  People who aren’t really into sports always scoff when fans yell and cheer at games, they say “you’re one of those fans that feel you have some affect on the game,” and laugh.  There is no doubt in my mind that an energetic and organized crowd can be impactful on the outcome of a game.  Just look at the home and road splits for the Mavs this season:

The win/loss differential between home and away games is just ridiculous and the numbers are significantly better across the board at home, except for those frustrating free-throws which we are below average either way.

One reason for the outperformance at home vs the road is shooting familiarity. The Mavs players spend a lot of time shooting at the baskets at the AAC and grow familiar with the environment in terms of depth perception and distance. Another thought is that it helps players to be at home and have their normal routine and that leads to better on court results. Both of these theories seem valid and I am sure they play into it but I also believe in positive energy and momentum and that a crowd mentality can play into that. A big part of what goes into a players performance is simply effort, and if you have 20,000 fans cheering in your favor, effort just becomes natural based on your adrenaline.

It also helps when you have elite playmakers and showmen like Luka, DSJ, and Dirk to incite the fans to those high decibel levels. Nothing hypes up the crowd like a Dirk 3, but the Luka step-back is fast approaching. Then behind that mavs fans go absolutely wild for whatever act of heroics JJ Barea has dialed up for that night.

The in-game presentation has been a lot of fun at Mavs home games this season. We have had great National Anthem singers like Brittany Holmes, and the speed singer Michael Borts. There have already been amazing halftime performances like the legendary bowl stacking of Red Panda, the raw skills of Peter Rabbit, and the amazing feats of the chin balancer.

Mavericks production is also continually coming out with fresh movie parodies with big-head mavericks faces of the top of the movie characters.  We have seen some great movie parodies already this year:

Slovenian Raphsody – a play on Bohemian Rhapsody, the 1975 song by Queen, and recent movie about Freddie Mercury and the band.

White Mavs Can’t Jump – This was bound to happen, the DSJ and Luka version of White Men Can’t Jump, a 1992 movie starring Wesley Snipes and Woody Harrelson.  If you go to the AAC for a Mavs game you will surely see someone wearing a shirt, then see me staring jealously at that shirt, with this artwork that became very popular once Luka was drafted. 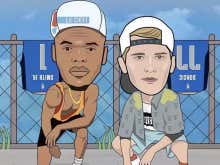 I can’t wait to see what Luka has in store for us on the court and what Mark Cuban has in ready for us off the court tonight on Video Game Night in the AAC.  On thing is for sure, I know MFFLs will be ready.

Now watch this HYPE video and let’s go get another W!